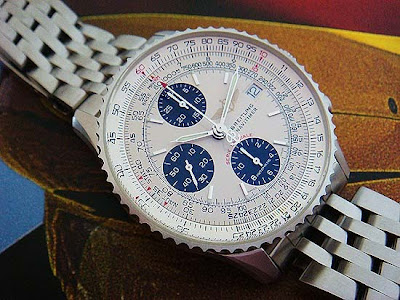 A couple of weeks ago, a lovely young couple was in our shop, looking at a fine Breitling Navitimer watch for the gentleman. After seeing the watch and with some careful consideration, they decided that it was precisely the watch they were after and that they were ready to purchase it – but just one thing stood in their path… the bracelet was a bit too small, and would require two extra links to comfortably fit on his wrist. Unfortunately we did not have any spare links for this specific watch, but told them that we would immediately contact DKSH, the authorised Breitling Service Centre, to source the links. The couple was seemed disappointed that they couldn’t take the watch home that day, but would wait until we had gotten the appropriate links.

We phoned DKSH that day, and they requested that we submit a fax specifying the desired part. We did so, and followed up after a couple of days to verify that they had received our request. DKSH informed us that the man responsible for watch parts was out of the office, but they would get back to us. Finally, we received a phone call from someone at DKSH asking for some additional information, a bracelet number, which we provided straight away over the phone. This gave us some (false) hope that they were actively trying to locate the links.

After several days of silence, we called back, and were told that despite giving the bracelet number, the man we really needed to talk to was out sick. Calling back four days later, the man was still sick! By then, it had been more than a week since our original request. Again after a couple of days, we phoned and were finally able to talk to the repairman who handles spare parts. He informed us that he had just gotten back to work after being ill; he had received our parts request, but it was in a large stack of other requests, and it would be a few days before he would be able to get back to us. After getting in touch with the relevant person at DKSH, we gave him a bit more time. A week passed and no response, so we called back. We were able to speak with the service manager, but unfortunately did not have any luck. She informed us that the repairman was extremely busy with watch repairs, and most likely would not be able to get to our spare links request until after the holidays. Despite being the service manager, she nor anyone else at the company, is able to locate and distribute spare parts except for the repairman who remains flat out or just plain “out”.

Before this entire debacle, we knew that DKSH was notoriously difficult to deal with, but their inability to supply two spare links has brought it to a new level. We are fighting ignorance; we are fighting continually arrogant people with no sense of customer service.

The tragedy of this story is that there is no ending. Three weeks has passed, and we are still unable to source the two necessary spare links to give the Breitling Navitimer a new home and we have absolutely no idea if the links are available, how much they cost or how long it would take to get them delivered.
Honestly, I doubt that there is a single person reading this who believes that answering a simple spare link request should take more than a fax and follow-up call. Neither does anyone believe that drilling a hole in a piece of stainless steel is rocket science; these links are not hand-carved out of some rare extraterrestrial metal, they simply come out of a link-pooping machine!

Update December 23rd .
Another week passes, and we contact DKSH Breitling Service Centre once again enquiring as to current status of our request. Unfortunately there is no progress as they’re closing soon and reopening on January 4th. We are told that they will deal with our enquiry in due time (?)...
Posted by Nick at 12:21 PM 3 comments: