On time, yet still too late

Barry Trengove went from London to New York to be an art director
for I. Miller, the classy American shoe company in the 1960's.
He arrived on Friday and went to the office.
The company was moving over the weekend and he wanted to check on where to report on Monday.
Passing down the corridor, he noticed that the walls were hung with
the original shoe illustrations done by Andy Warhol for advertising
campaigns in the 1950s. The movers were shifting out furniture
and had begun to stack the pictures in a corner.
Finding the foreman, Barry inquired what was happening to them.
"They will be thrown away tomorrow", he said.
"Um", said Barry, "I quite like them".
"Well," said the foreman, "come in the morning at nine,
five bucks and they're all yours."
Barry didn't sleep all night.
He was back there bang on nine.
"Sorry," said the foreman, "the rubbish was collected earlier than expected."
[The art of looking sideways: Warhol's Shoes]
Posted by Nick at 12:01 PM No comments:

We often receive emails about Rolex Submariner pin holes, gold strip and end links. In general those terms refer to bracelet and case properties. Photos below are self-explanatory. Important note: the purpose of this article is not to provide definite cut-off production dates, but rather to point out differences between similar models.

According to Rolex's practice, changes to case and bracelet were introduced gradually over the years. For example, the non-date Submariner 14060 was manufactured with pin-holes and an older style bracelet up until 2008. On the other hand, the Seadweller 16660 was fitted with a solid end link bracelet in the early 1980s! The 16613 gold and steel was the only clean-cut issue: the new bracelet was introduced in 2000 and the no pin holes case in late 2003/ early 2004. 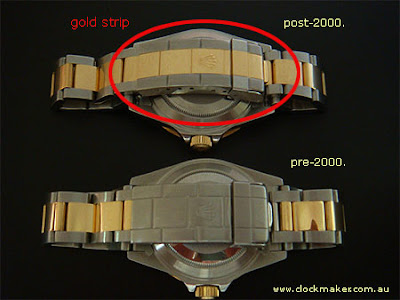 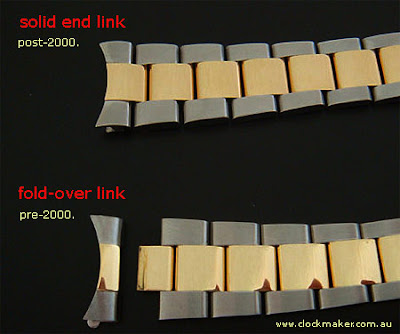 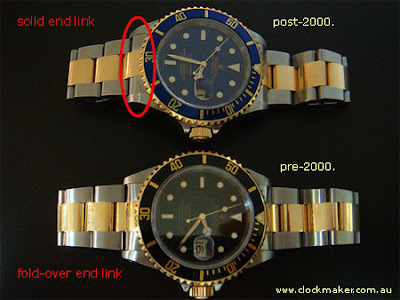 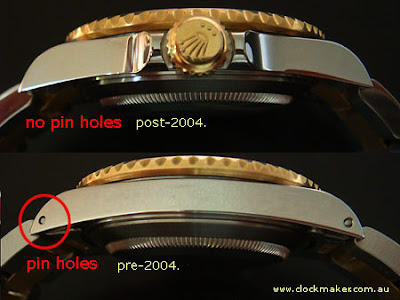 Sharing private photos with strangers is probably not a good idea, but hey - some of you have been receiving my newsletters for over 10 years so technically speaking, you no longer fit in that "strangers" category.

The guy on the right is my father. Photo was taken in 1961 when he was watchmaker at his brother's workshop. His older brother Mihailo completed his 'mastership' just before the WW2 and after the war he set up his own business. For many years, the town of 50,000 people was blessed (or cursed?) with not less than 7 watch repair establishments! Talk about competition..! 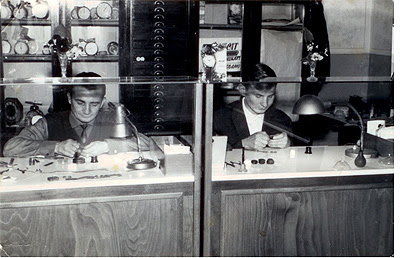 And here is a photo taken during a trip to Austria in 1967. I guess standing behind the sun dial ("sun clock") was such a natural thing for a watchmaker. (I am the fatso on the right) People often ask: how did you get into the watch business? Well it's simple - I had no choice... 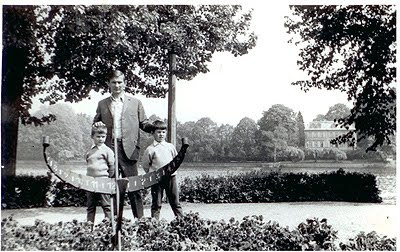 My father just turned 71 and his brother (I call him grandpa) is in his 90s. Both still fiddle with clocks and watches, and for over 60 years, family business is still at the same address!
Posted by Nick at 11:04 AM No comments: