Pop Quiz: The Results are in!

The response to the quiz was overwhelming! A total of 247 replies were received within 24 hours.

Quite frankly though, I was a little disappointed with the number of incorrect answers, especially since the correct answer was there - a simple guess should have had a one in four chance!

Some of you went to great lengths to explain why one or the other case back was 'wrong' by taking into account style of letters, font, symbols, logo type, finish of steel, model and reference numbers.

Yet only ONE correct answer was received:

Both are genuine! I’m from Sabah, Malaysia.

This just proves that our northern neighbours do know their watches and are good students of horology!

(Michael: Please email me your address - I have a small present for you).

"Original or fake?" is my favourite watch topic. Often, there is no easy answer and it takes a great deal of effort and expertise to become 'fluent' in this area of horology. Putting the pieces together, working backwards and employing every available forensic skill is often challenging...but always rewarding.

The purpose of the quiz is to encourage you, my fellow watch enthusiast, to question everything and to have some fun along the way :-)

In regards to case backs: I hope to be able to present you with a brief article on what to look for in order to avoid pitfalls. Stay tuned!

It goes without saying that buying a fine timepiece based on photos is like handing over your wallet to a stranger. If your chances are 247 to 1 then basically you stand NO CHANCE against online scammers! Scary!

Now, are you ready for your second chance?

(And If you find my emails of no value or if I'm wasting your time then of course, feel free to unsubscribe - see below for details)

I want you to win :-) so although today's question is not much easier, you should have more chance of scoring with only 3 answers to choose from.

Below is a photo of four Rolex dials, the first one is from a Datejust model and the other 3 from a Submariner.

The second photo shows the reverse side - and the third one shows writing on each dial in detail.

Note that only one dial is signed "Rolex". 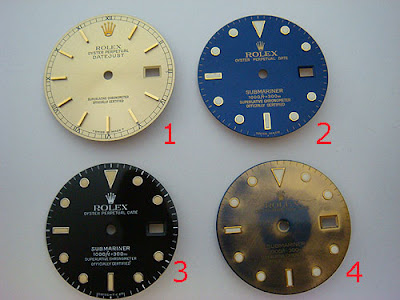 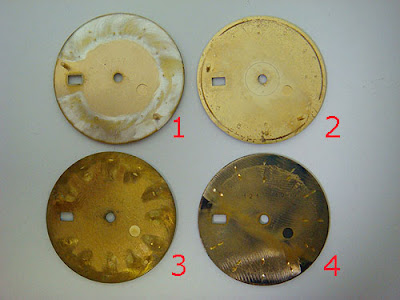 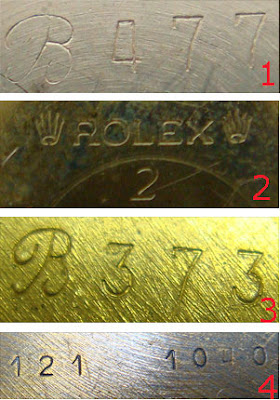 Mail your answer to nick@clockmaker.com.au

So you think you know your Rolexes? Then here's a little pop quiz for you:

Shown below are two case backs.


Which answer is correct? 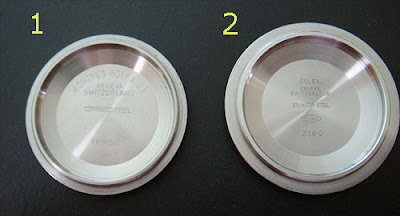 Before you rush to answer, take your time to study both
case backs (enlarged images below). 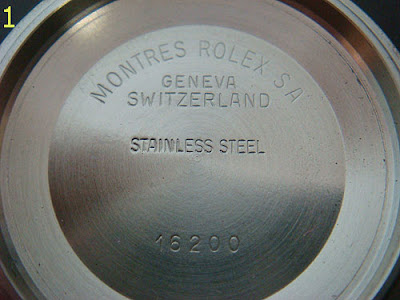 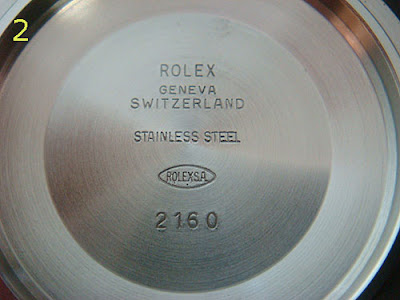 Send your answer to nick@clockmaker.com.au

Good luck and have fun!

Another day, another fake...

As you may already know, the ultimate reward for a watch dealer is the 'discovery' of an unworn sleeper: a watch which is 30 or more years old, yet in unworn condition.

Last Monday we received a call from a young lady who wanted to sell a “beautiful and unworn gold Omega watch”. Unfortunately the Omega Geneve in 18K solid gold case accompanied with the "original" receipt of purchase (dated 1972) turned out to be just another fake. Yes, the movement cal 601 was an original Omega movement, but everything else - the case, bezel, case back and bracelet - was unfortunately after-market production.

The dead giveaway was the shape of the case. And even more so, the inscription found inside the case back: 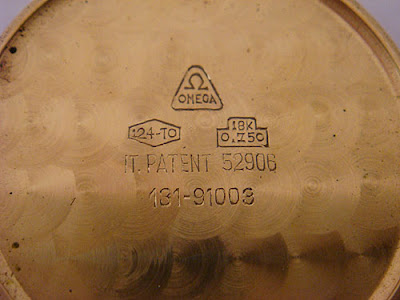 While it could fool an untrained eye, for an expert this case back was a painfully amateurish attempt to deceive. The logo type, the engraving, the style - in fact, the lot - was just wrong. 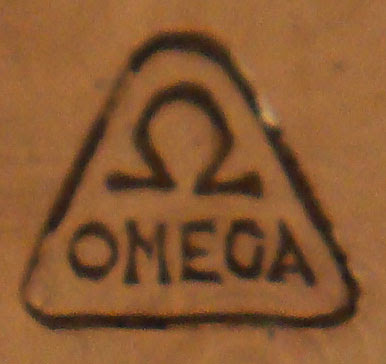 In this particular case, the engraving was done by hand using a sharp engraver (Omega case backs are stamped, not engraved). The quality of workmanship was pathetic too; each and every letter was engraved out of line, and even the Omega symbol is out of shape. 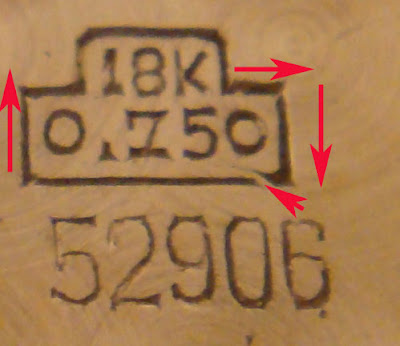 The second line was even worse: it looked to me like it had been engraved by some old half-blind crook working by candle light. I almost feel sorry for the poor bastard!

Ironically, the middle case itself was nicely done. It was highly polished and would appear attractive and even desirable to anyone whose best watch had been a Russian Raketa or Poljot.

The "original" receipt was issued in Italy and printed in both Italian and Serbo-Croatian. No doubt, the intended market for this forgery were cashed-up Yugoslav customers who flooded Trieste in early 1970’s.

While I had to politely decline to buy this watch, it certainly has brought back some memories from my early days as watchmaker-apprentice from my father's workshop. Very often, "new" Italian watches were brought to my father's workshop and he was often left with no other choice but to break the bad news to gullible buyers.

The world of forgery knows no borders and when it comes to watches, this trade has been alive for at least 500 years. Back then, the master con artists were the Brits and French, followed by Spaniards and citizens of New Colonies. Italians, Russian and Romanians had their run in 1970’s until global trade took off in China, Vietnam and Korea.

Today, thanks to the advancement of Internet, there is practically no country that is not involved in some form of watch scam, fraud or forgery.

Another day, another fake...
Posted by Nick at 3:20 PM No comments:

An e-mail we received from DeskDivers' news desk - A MUST READ! 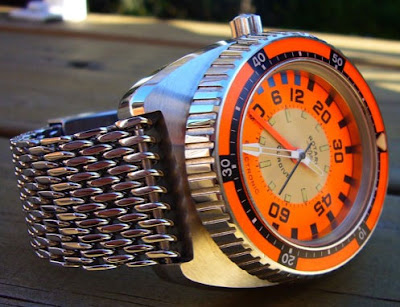 Back in 1968 a small watch company filed a patent for a cool idea to measure
depth on the dial of a normal dive watch. They decided to back that watch
with technology through and through using cutting edge ideas including
hydraulics and an electronic movement. What started out as a good idea
became a seriously good product (not without its ups and downs of course),
yet within 10 years the company was no more - quite a rollercoaster of a
ride for any business!

Click here to get the full story
Posted by Nick at 3:00 PM No comments:

We are constantly bombarded by fake items; from leather bags, to clothing, to jewellery, to watches, “knockoff” versions are everywhere.

For some reason, most people seem to think this is a relatively recent occurrence due to the sheer volume of fake stock currently available, when in reality, counterfeiting is as old as humankind itself!

There is a small pocket of the consumer market that is fine with the phony version of larger brand products, but ultimately production of these goods harm the original manufacturers and those willing to pay for brand name and the quality that comes with it.

The problem with fake goods is that the quality of them is now almost as good as the quality of the originals, and in some cases, even authorised service centres are unable to distinguish between genuine and fakes!

To combat this, it is common practice in the watch industry that the manufacturer would use a “secret signature” to mark his product.
Here is an example of Cartier’s signature: a rose symbol stamped on the middle case, just above 12 o’clock and underneath the bezel. 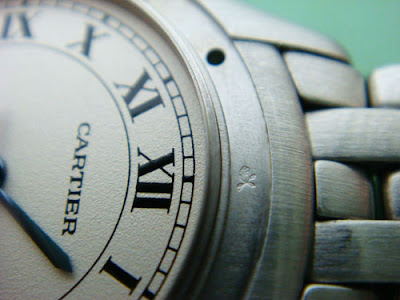 This symbol is not there for the end user. It is well hidden and tucked away from the eyes of counterfeiters as well. It is there for the service centres as assurance that they are assessing and dealing with the genuine article. 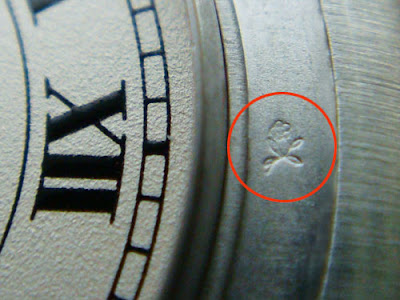 Of course the “secret signature” does change from time to time, which makes our own investigative more interesting!
Posted by Nick at 12:11 PM 1 comment:

Yes, we've seen them all.

Every now and then, a watch brought in for repair reminds me that fine watches are not designed and built for those who have no appreciation for fine mechanical engineering.

Pictured below is a four years young Rolex Submariner 16613. What exactly happened to it will remain a mystery, and even more so how it happened; but one thing is certain: applying brute force will not do any good to the fine winding system of any mechanical wrist watch.

Here is a brief explanation of what happens when you pull the winding crown
to set the time:

The stem (attached to the crown) will engage a number of setting levers, which
will in return push the clutch wheel to engage with the intermediate setting wheel. From there, the motion is transferred to few more wheels and finally to the hands. 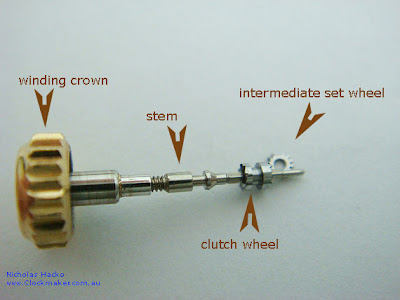 Needless to say, the gear work is very fine and requires gentle handling.
Applying too much force too quickly will definitely cause problems.

To put the things in perspective, here is a shot of a clutch wheel and set wheel
next to a 5 cent coin: 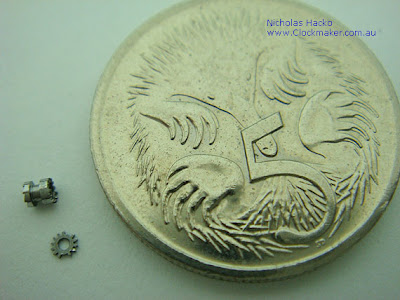 If those wheels are free to move and lubricated properly, they will withstand
significant winding force. However if the wheels seize up or are jammed (by a loose crew or case clamp) then unfortunately something will break.

And here is another close-up: 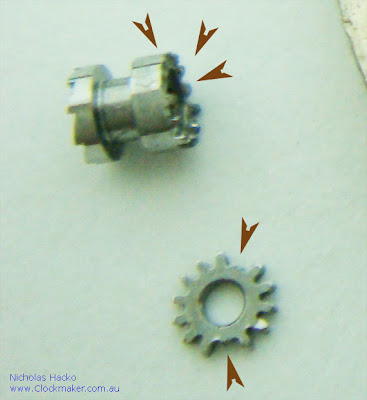 Note the stripped teeth! In addition, the hardened steel setting lever was bent too! Black specks shown above are actually broken off teeth that have lodged themselves
deep inside the watch movement, causing the watch to stop.

And all this could have been avoided with just a bit more care and common sense.

The photo below shows partially disassembled Rolex 3135 with calendar and winding system removed. 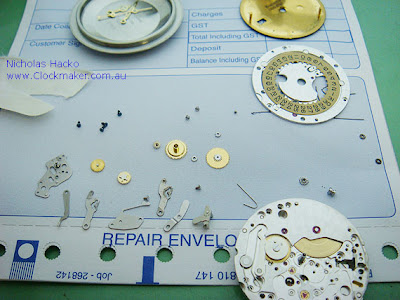 The bottom line is this: if the winding or time setting feels strange or tight, restrain yourself from applying any excessive force. Leave it as is and take it to your watchmaker. Often this is a tell tale sign that your watch is due for an overhaul.

The last thing you want to do is to cause further damage - which is not only completely unnecessary, but very costly too.
Posted by Nick at 4:27 PM No comments:

If you are one of my regular subscribers, then you are well aware that I am a sucker for Cartier alarm clocks. Fine Cartier clocks have been in production since the late 1800's, and some of the finest examples are now worth many hundreds of thousands of dollars! They have always been regarded as toys for the privileged few, but in today's era of mass production, it is nice to know that Cartier is still designing fine alarm clocks.
Yes, starting your day with the soft chime of a Cartier alarm clock is one of life's little luxuries... 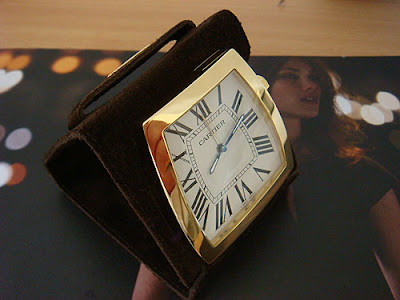