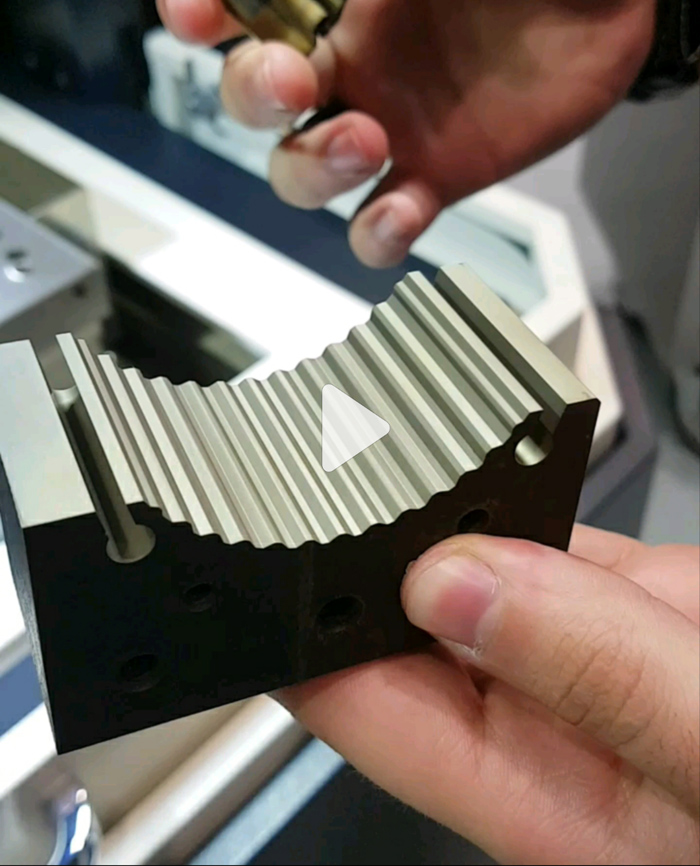 An ugly looking, hardened piece of steel transformed into a beautifully finished tool. The cut can only be described as black mirror finish. Cutting time: 5 hours. Andrew designed it, drew it, programmed it and then cut it on EDM.
And this is exactly what we are trying to create here in Sydney: an opportunity for smart kids to express themselves in an amazing way. Make no mistake: no University workshop would offer such an opportunity, and no commercial enterprise would 'waste' thousands of dollars just for the sake of learning. But we have no choice but to invest in kids, to allow them to fully develop, so that one day they will be making some amazing timepieces.
Check out the video on our Instagram below:
https://www.instagram.com/nicholashackowatch/
Posted by Nick at 11:00 AM No comments:

It's all about workmanship 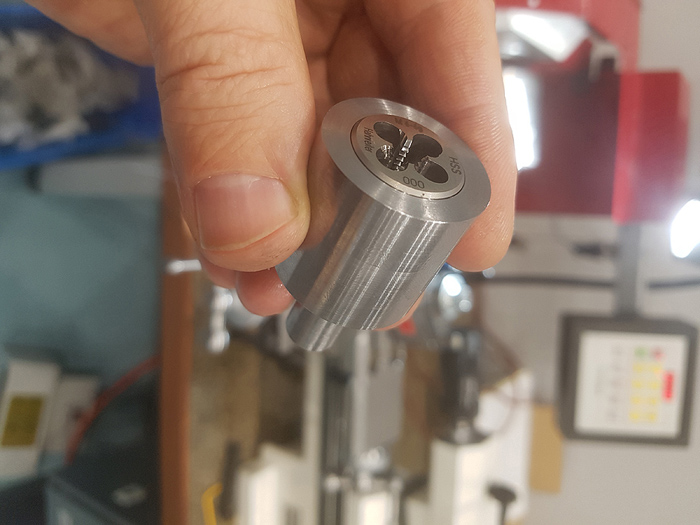 So what is the big deal with watchmaking and clockmaking, you may ask? In one word: it’s all about workmanship.  For hundreds of years makers not only made timepieces but worked insanely hard to 'outdo' each other. Finishes, shapes, metal work, design, functionality all intertwined together with one goal: to impress and showcase the maker’s genius.

My approach is less pompous - but there is no room for improvisation and cutting corners. Here is just one example.

Yesterday the plan was to turn four brass pillars for regulator mainplates. Since this is still a prototype the focus was on construction rather than beauty. However, it soon became obvious that the inexpensive Chinese die for thread forming was outputting a rather inferior thread. Surely, once the nut is fastened, no-one would see it - except, of course, me. And that would bug me. So I pulled out a German die - and what a difference!  Judge it for yourself: The first 5 turns were formed by a quality precision die, and the last 5 with an inferior one. 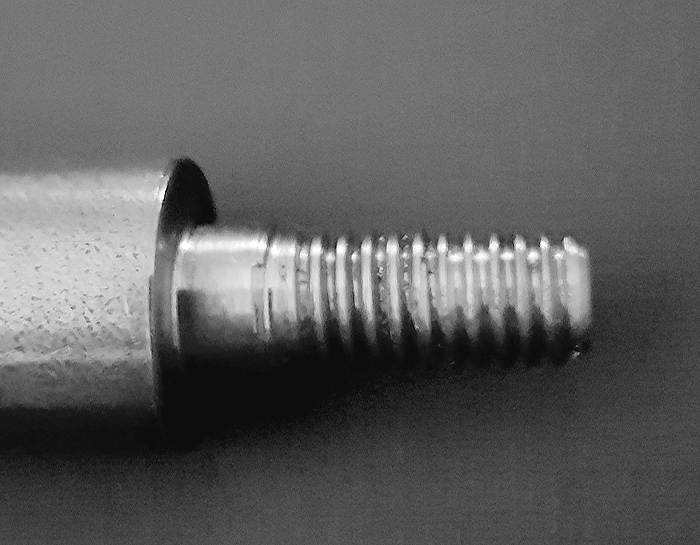 If you now wonder why I didn’t use 'the proper' die in the first place the answer is - Hahnreiter dies are expensive and should not be used on prototyping – and, further, the die holder for our Schaublin has not arrived yet. So I made one myself - which turned the 20 minute pillar job into a whole afternoon tool making project.  Time wasted? Absolutely not. 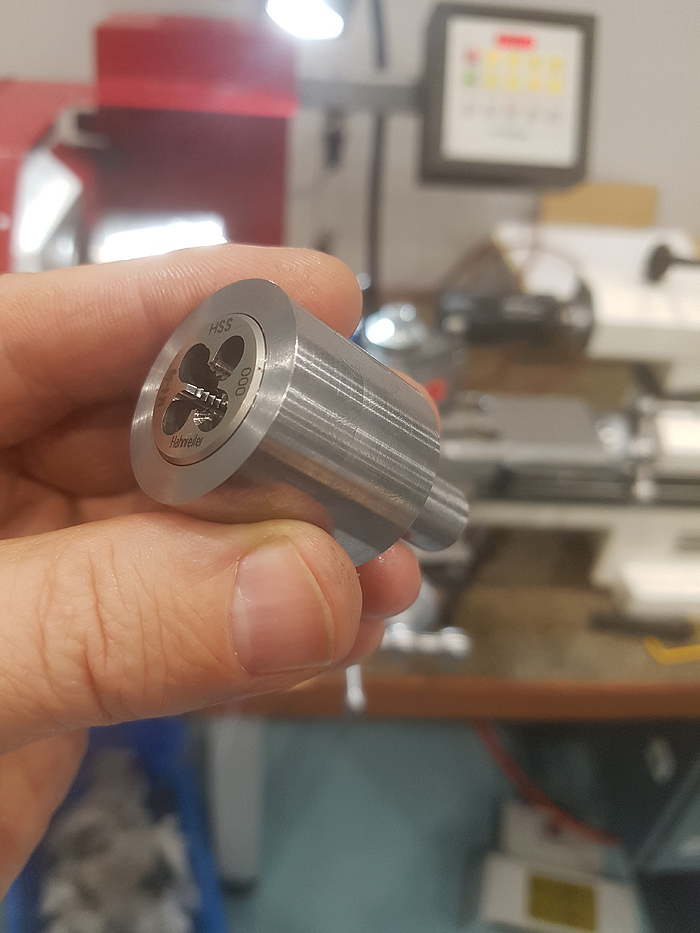 And while we are on Hahnreiter: the German precision  toolmaking company dates back to the mid 1800's. After the second World War the factory was flattened to dust but in 1947 the firm restarted its tool manufacturing business with just one employee.  Today, Hahnreiter is the leader in German tap and die engineering.  They have 2600 different die sizes  in stock  and an order placed by 3:30pm is shipped the same day. Talk about the power of one! 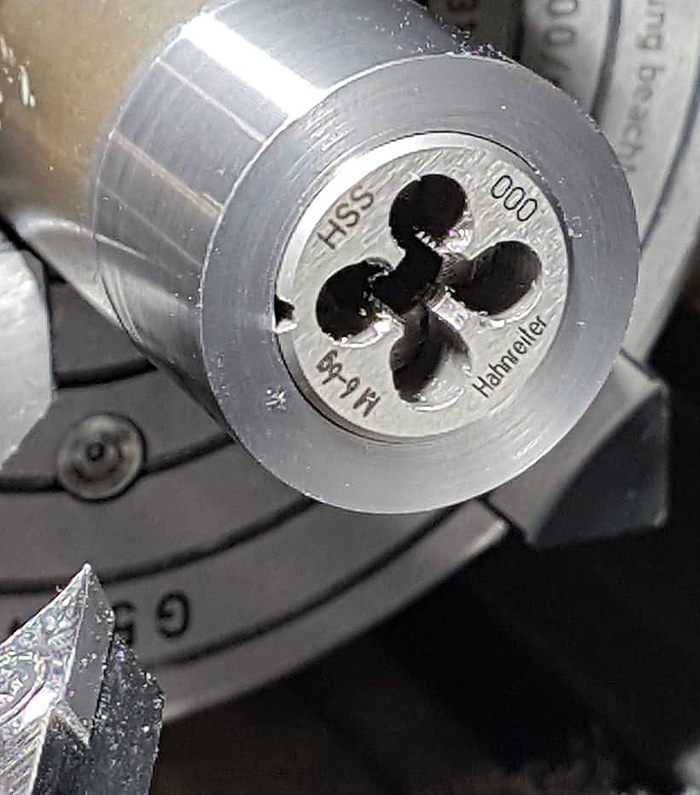 Major milestone: we've planted the watch winding stem! 0.6 mm drill travelling 20mm down to create 1.2mm deep hole. The action is at half speed and quite frankly nerve wracking. Next step: dial feet fasteners then some fine tuning. Yes, out of all places- watch made in Australia! 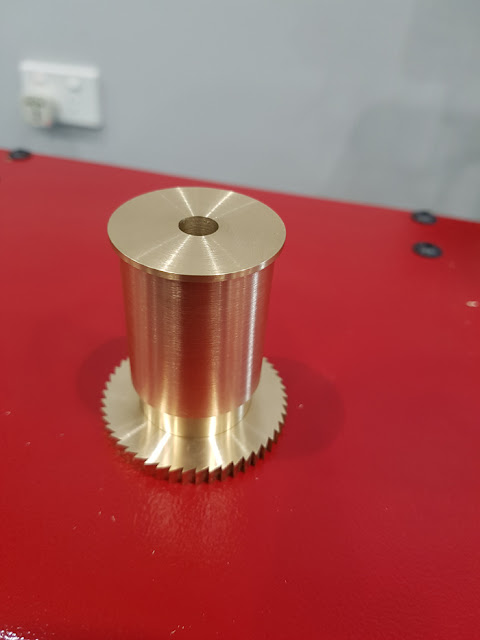 On Sunday, six hours were spent behind the Schaublin turning the barrel. The end result: about half done. I needed the grooving insert and boring bar to continue further, and, quite frankly, after standing for six hours my legs were just killing me. Josh quickly placed an order for tools and on Thursday a small packet arrived from Sumitomo, Japan.
Sumitomo was founded in 1907 and today is one of the fine-tuned, multi-industry corporations which span from automotive to energy, electronics, semi-conductors to toolmaking.  The cutting tools division was founded in 1927 with the development of cement carbide inserts. To say that they know how to make an excellent cutter would be an understatement. As expected, the small parcel on the bench was every bit you would expect from the land of the rising sun: a piece of art itself.
There is no guesswork figuring out the cutting speed or misunderstanding the other important parameters. Each insert is individually bar coded and traceable - indicating that a tool like this is used to make components that will later fit into devices of the most importance - think of airplanes and submarines, satellites and super fast trains - where mistake is not an option. Certainly an overkill for a humble Australian handmade clock – but, to be perfectly honest, being exposed to perfection is not a bad thing.
One thing is certain - if you can't turn a 17th century clock part on a Swiss Schaublin using the most advanced Japanese cutter then you have no-one to blame but yourself. 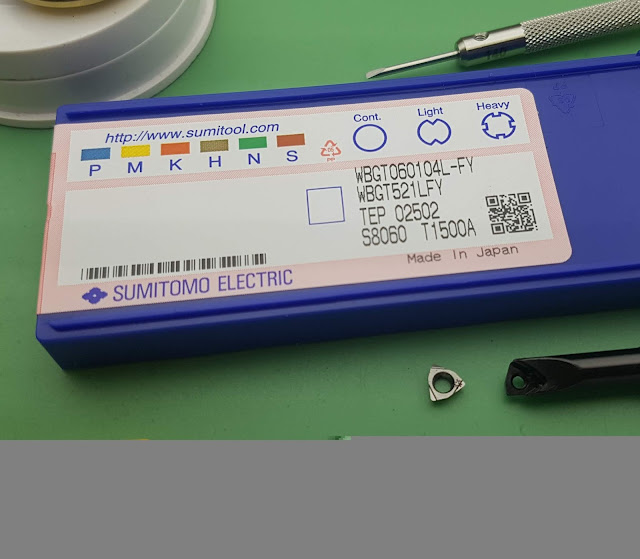 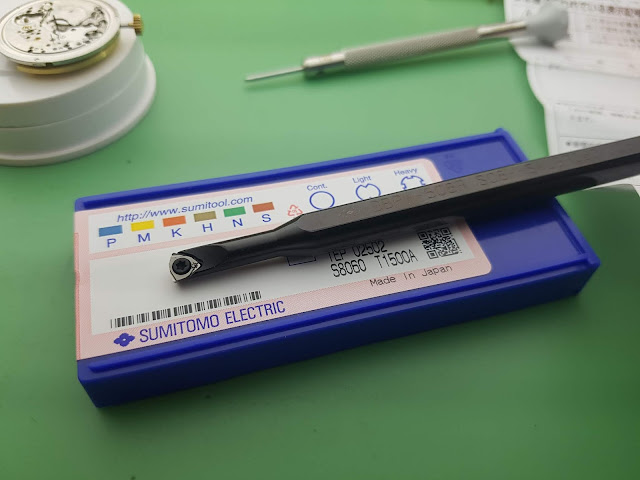 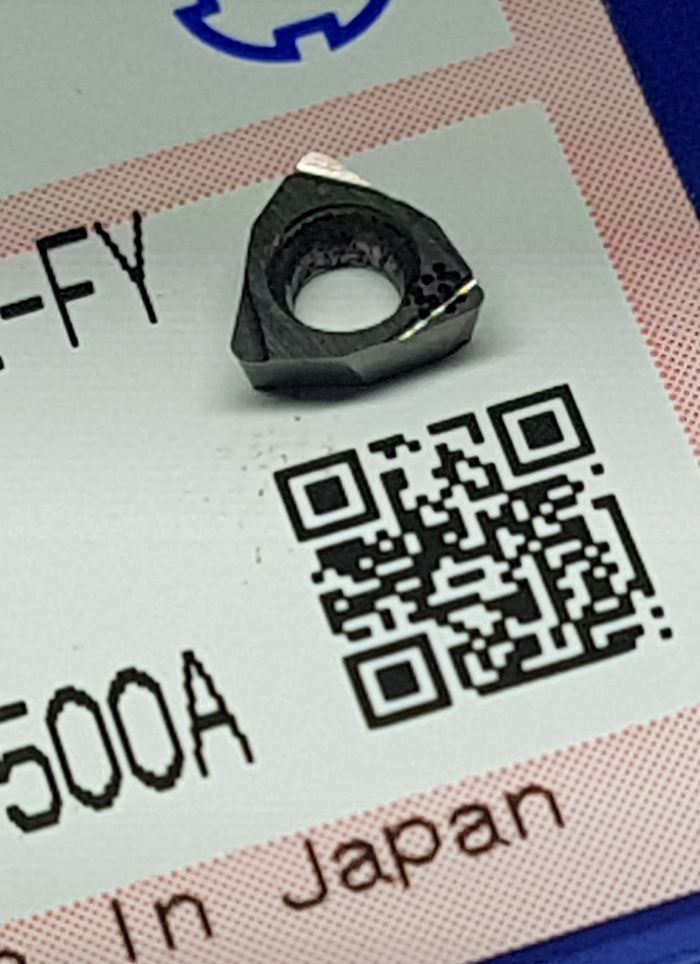 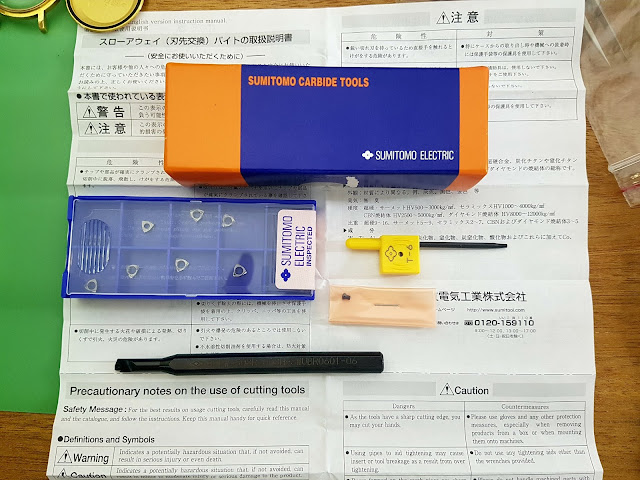 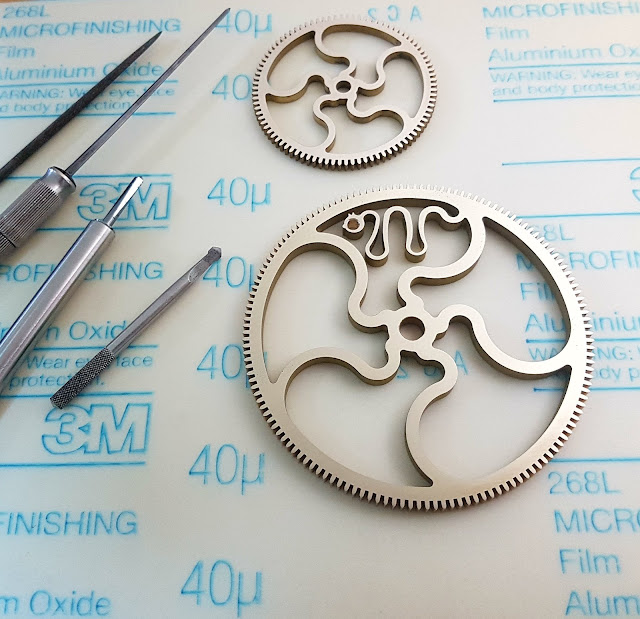 To be perfectly honest with you, the novelty of making the most perfect regulator gear wore off pretty quickly. While the machining process is painfully slow - and painfully expensive - the end result is predictable:  each wheel is identical to the previous one down to a couple of microns. Yes, we are dreaming the dream of every horologist who has lived in the past 500 years.  But perfection, without imagination, is simply boring.
On Wednesday Andrew and myself were just about to cut the last spoke, and we started thinking about how to design a recess which will accept a power maintaining spring. Traditionally, the spring itself is just an unattractive steel wire hidden behind the gear.
"I am sure we can do better than that, my boy" was enough to kick the young apprentice’s mind into gear.
"What if we make the spring out of brass?  What if we design it to become an integral part of the wheel itself?" He asked.
"Sure - but why stop there?" I replied. "Let’s make it in the shape of a little sea monster who will hold the return pin in his mouth".
We argued a bit whether the sea monster had ears, does our mystical creature look more like a worm or a caterpillar, while Josh poured cold water on the idea by pointing out that brass has a very poor elasticity memory and our spring is not going to work at all.
But it did.
It worked brilliantly: it fired up the most important tool we have - our imagination.
We can all clearly see that every regulator clock we are going to make will have a small, imperfect hand-filed and hand-finished "living" mystical creature in it; a dragon or a rabbit, perhaps a snake or a lizard, which will live inside the perfect mechanism like a little clock guardian.
As crazy as it sounds, I wonder why in 500 years of gear cutting has no-one thought of this? 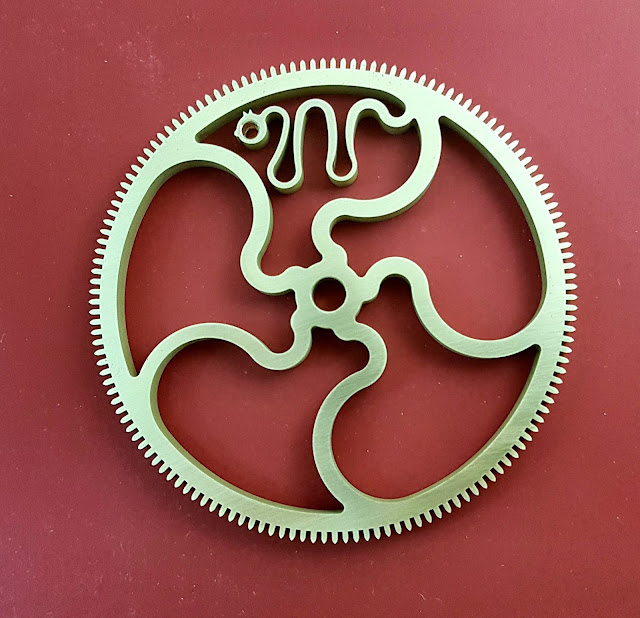