You know you've made it when... 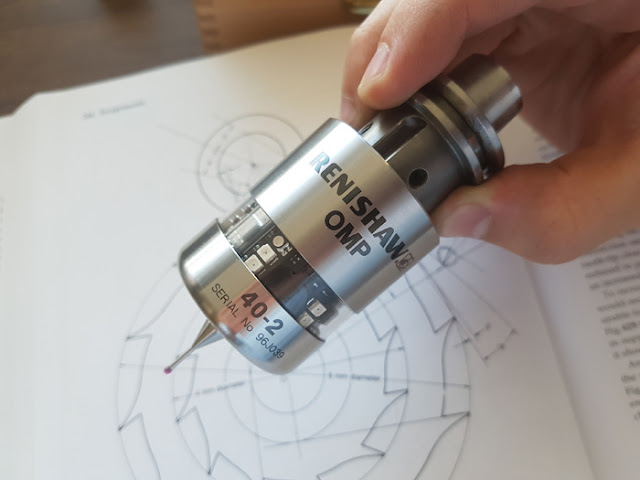 ... your product becomes a synonym for an entire industry. Which is precisely in the case of Renishaw - or renishaw.
The Renishaw company was founded by two Englishmen: Sir David McMurtry and John Deer in 1973. McMurtry had needed to measure fuel pipes on a prototypejet engine. At the time, measuring machine sensors featured a rigid 'tip' which required manual positioning and which yielded poor repeatability when measuring delicate components. To meet this need, McMurtry invented a spring-loaded touch-trigger probe device tip, which he then patented. The new instrument tip was an elegant solution and was quickly adopted by leading manufacturers who needed measurements of ultra precision.
Our Kern mill arrived equipped with a renishaw probe. What a beautiful instrument! A glass enclosure reviling an electronics 'brain'; micro ruby ball on the tip of the styli; rigid - yet at the same time, a fragile, delicate instrument. The renishaw is mounted on the tool holder and can be 'grabbed and attached' on the main milling spindle automatically. Of course, for those of you who are into fine machining or coordinate measurement systems, this precision instrument is something you commonly see in action, on perhaps a daily basis. But for us, who have just started our journey into watchmaking, this renishaw is a very exciting newcomer to our workshop.
Made in the UK. Cool!
And here is one more bit. Unlike the watch industry where every brand is working hard to 'stamp' its name on every single component claiming that the dial, hands, cases and all movement components are made 'in house' (when they are clearly not) it is really refreshing to see that true engineering companies which specialise in high-end manufacturing are actually proud to disclose their association with other industry leaders. And when you think of it - why would Kern even want to make their own renishaw when Renishaw has already invented a damn good one? Why would a world leader in the milling industry want to make collets for its machine when Schaublin, the leader in collets, has already reached the levels of precision required? And the list goes on - Erowa, Siemens, Zeiss, Boch... all supplying parts and technology to each other, for a common benefit.
While 100% 'made in-house' may be great marketing news, such a watch mechanism is doomed to be a very average performer. Like it or not, sooner or later, 'in house' will become a synonym for a product which will lack the future; a product developed to please the brand itself rather than a consumer, at the cost of innovation and technical advancement. Open for cooperation, open for learning and sharing, an open mind.
Quite frankly, I am so glad we are not in the watch industry anymore.
Nick 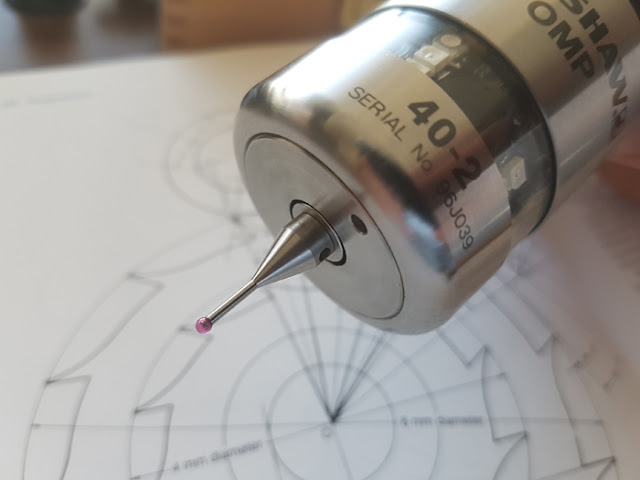 It's all about information 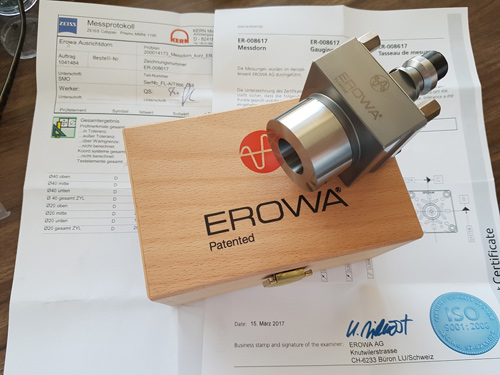 The year is 1850.  Suppose you are a reputable country watchmaker. In your shop window you have a large dial clock and all day long your customers and passers-by would stop in front of your shop to set their pocket watches against your master clock. The question is: How would YOU know what is the correct time?  Obviously this information would have to come from somewhere!  The solution was simple.  Every week or two you would take your best pocket watch, buy a newspaper, hop on the train, travel to London - and there you would set your pocket watch against the clock on display at the most reputable London clockmaker, who himself would have got 'his time' from Greenwich.  And there, at the observatory, clocks were set and regulated by astronomers, mathematicians and scientists who were really the 'true time keepers' because they knew how to calibrate their clocks against the movement of the stars.  Indeed, for a country watchmaker weekly trips to London were often the highlights of the week.

Of course, with the invention of radio, everyone with a wireless could have direct access to accurate time. Bip, bip, bip - the time is 8 o’clock.

Nowadays, we no longer need radio signals nor any effort on our behalf in order to 'know' the time. Thanks to GPS and the internet, our mobile phones and commuters are 'synchronised' countless times per day - and the time itself comes directly from the network of atomic clocks located all over the planet.  In just 100 or so years we have come a long way!

However, when it comes to the 'dissemination' of some other types of information we are still facing some serious issues with accuracy.

For example, suppose that you live in Germany and you've engineered and built two superbly precise machines. One stays in Germany, while the other is disassembled and shipped to Australia. The question is once that Australian machine is reassembled how are you going to calibrate it so it will machine metal as accurately as it did before, as the one on the different side of planet?

As clever as it is, the machine itself cannot calibrate itself.  As accurate as your watch may be, it will not tell you the time, unless you FIRST tell your watch what the time is! In both cases, the information has to come from an external, super accurate source.

I will not bore you with the details - but in the case of our five axes nano precision Kern mill, this outside information comes in the form of a small metal object which 'contains' crucial information. This object is machined in Germany to extremely tight tolerances, measured in a number of points, then shipped to us to be used as calibration 'etalon'. Without it, our machine could not be set.

While the geometry of 'etalon' is simple, thanks to the extreme precision with which it was machined and measured, it contains a number of crucial information. It will help us to establish the centre point of the table, work holding position, the eccentricity of the spindle, the relationship between the three main axes - and much more.

Due to the fact that it had to be mounted on the tool holder, it was manufactured not by Kern, but by Erowa, a German 'tool holding' specialist.  However, after Erowa measured its dimensions, Kern re-measured it and re-certified it again, with even more accuracy. Each dimension was measured a number of times to 1/10 of  1 micron. Yes, we are talking nano!

The photos below are attached for your enjoyment. If you wonder what the cost is of this tiny piece of metal, then let me just answer this question in an indirect way: the etalon is kept in a safe and I am the only person allowed to handle it.

As you would imagine, we are now very anxious to get our mill assembled, calibrated and running.  However, we still don't know when the German engineers will be able to travel to Sydney to assemble it. Christmas/New year and endless European holidays are not working for us.  Patience, patience! 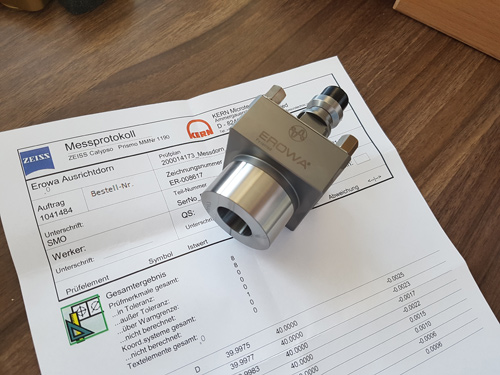 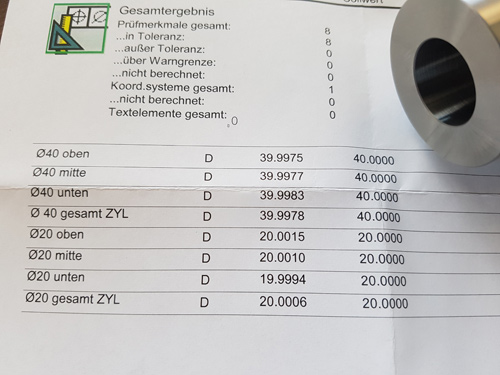 The art of self-promotion

It is not just bad taste, poor manners, lack of empathy - or simply just being a jerk. Self-promotion is a crime.
And especially so in Japanese culture! I am not kidding: a poor Japanese craftsman would rather commit a harakiri than post a message on Facebook about the knife he hand-polished for 3 months to perfection. He would rather take 40 lashes with the cane for failing, than one compliment for achieving perfection. Strange.
It is funny, but while the Anglo-Saxon culture has almost nothing in common with the oriental one, self-promotion is a sin even in our little colony.
Crocodile-wrestling-tough-as-nail sun burnt Aussies crawl under the rock at the very thought of even being in the same room as a self-promoter. Nearly a hundred years of exposure to Greek-ism, Balkan-ism and Latino-sim (the cradle cultures of macho-self-promotion) made our good Aussies even more resistant and more sceptical to any form of advertising with even the slightest hint of 'yeah, sure, we can do this'.
"Wait until they discover your talent" say Mosman mums to their daughters as they jump out of mega-monster 4WD’s, being dropped in front of $40K per year schools. "Wait until they discover your talent" say dads dropping off boys at multi-billion dollar ovals. And make no mistake, like mums and dads, these very kids are already driving their own E-class Mercedes and wearing gold watches – and they play great cricket. But to tell anyone how good they are would be totally inappropriate. "Wait until they discover your talent" is what every 12 year old surfer hears every time he eats his vegemite. Be modest, be humble, be invisible; let others see what you are really worth and give you the credit you deserve.
But life is no longer as it once was. "Others" are no longer a passive audience quietly waiting for the next Sir Bradman. "Others" are us: posting selfies on FB, Instagramming, chatting, and simply being alive; connecting, talking and sharing.
You see, I don't mind modesty. Actually, I much prefer to wait 'to be discovered' than to self-promote myself. But on the other hand, I am not a big fan of posthumous awards either.
Right now, as I type this, we have a great need for a 10 tonne forklift to move some equipment; we need an energetic and reliable office assistant; a smart and hard-working apprentice keen to learn about watches; a photographer who won't charge an arm and a leg; a reliable local server to host our new website; a 2KV petrol generator (not too loud!), an oven for steel hardening, a polishing machine - which comes with expert advice and the right polishing compounds. And we are not any different to other small Australian businesses. Yet somehow, those who are experts in their fields are often hard to find - because they have always been told the same old thing; "wait until they discover you".
This week a rebelde-owner brought in his 3 year old watch for a minor adjustment. However, he wore that watch daily so it was heavily scratched. So we decided to surprise him:   We pulled the watch completely apart, serviced it, polished the case, fitted a new winding crown and seals - and even fitted a brand new leather strap.  Total charge: zero. Why? Because we simply want to show him what we can do, and how proud we are of our workmanship. And how much we appreciate the fact that out of hundreds of brands he put his trust in rebelde.
And here we go - I just committed the worst crime ever: I self-promoted.
Guillotiner, make it quick.
Nick