Things that make you tick

Last week I've sold an Omega Seamaster chronograph watch to a customer in Melbourne.
Before shipping I've checked the watch for a timekeeping, as I routinely do.
Seamaster chronograph is based on Valjoux 7750 movement which is
fairly rugged and reliable chrono. The watch kept almost perfect time: +1 sec/day
with 'healthy' amplitude of 330 degrees and zero beat error.
All good!

The watch was double boxed and shipped to Melbourne with overnight
courier.

Following day I got an email from the new owner.
He was very unhappy to say at least; his new Seamaster was gaining
two minutes per hour!

Obviously, he had every right to feel 'cheated'.

And so did I ! The reason why a mechanical watch will gain time like crazy
is always of mechanical nature, and most common reason of all
is mechanical shock. Whether the watch was dropped by the new owner or poorly handed
by courier it was at that point irrelevant.
I suggested for watch to be returned for further inspection
and made an offer to repair it free of charge.
Sometime it is much easier to accept blame
then to argue (yes I am happily married man, I've learned this trick 20+ years ago).

As per my expectation, the reason for excessive gain was
neither mysterious nor difficult one to rectify. Nuisance, nevertheless.
(Fellow watchmakers reading this email have probably guessed what was the problem). 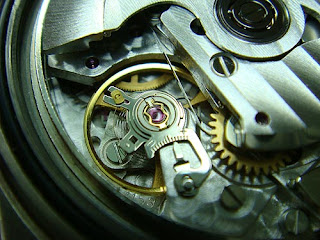 Due to sudden shock, first coil of hairspring was pushed underneath the stud. As a result, hair spring
was physically shortened. The rate of oscillation become much higher
and watch was gaining time. I've 'painted' that first coil in red so you can see
what I am talking about. Photo below is showing enlarged balance wheel assembly. 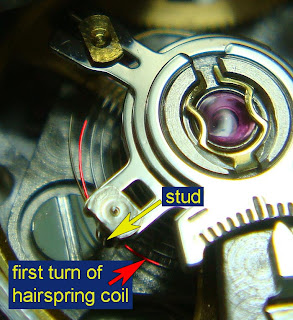 All that was needed to restore correct oscillating frequency was to
unjam that first coil stacked underneath the stud.
Two seconds repair job!
Below, I've painted this first tun in green so you can compare it's
"before and after" position relative to stud pin. Note the even spacing between
adjoining coils - approx. 2/10 of millimeter! 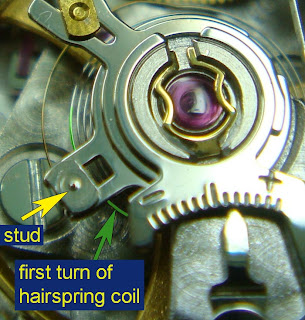 Bottom line: Valoujx 7750 is fine chrono movement
designed to withstand fair amount of 'bashing'. But it is still
a mechanical watch movement and as such definitely not shockproof.
Like with any other mechanical device, things sometimes do go wrong
and small imperfection can cause substantial malfunction.
If you are new to watches then I suggest to invest
bit of time learning about maintenance, servicing and performance
of mechanical timepieces. Such investment will pay off big time in the long run.

All Sydney watchmakers I know are bit 'coockoo' - they have spent years
learning and practicing watch trade, dealing with both watches and customers.
Reputable ones are stubborn and grumpy but very proud, trustworthy and
honest people. They know their stuff inside out - but believe it or not - have absolutely no control over
Australia Post Express overnight service to Melbourne.

You have really great taste on catch article titles, even when you are not interested in this topic you push to read it