Last week a note from a fellow subscriber was received - with a complaint about the length of recent news articles. He concluded that I "...obviously have far too much time on my hands." What a compliment! Anyway, should you prefer a shorter newsletter (or no newsletter at all) then you may wish to skip this one.

However if you are a technically-minded person then I am sure you'll enjoy my struggle with time and time transportation. In addition, I would strongly recommend this article to all single ladies as a final proof that choosing between an investment banker and a geek is a no brainer. You have been warned my dear!

But where does the time come from ?

It may sound strange, but the time is actually baked. Like my wife's strudel - it comes from an oven. There are few bakeries around the globe which 'bake' the time. And once a day, all bakers get together and show their strudels to each other. Just to make sure they have got it right.

Of course, scientists don't call the time strudel, neither do they call their laboratory a bakehouse, but when you think of it, this is how it really works. In essence, time is GENERATED.

For reasons shown later, I will take you through the kitchen of NICT, located in Japan. Men in white coats who work at the National Institute of Information and Communications Technology call their strudel JST - Japan Standard Time.

Since we all know that the most accurate clock is an atomic clock, you are guessing that JST is generated by an atomic clock. That is just partially true because time masters have at their disposal no less than 22 atomic clocks! And this is how the kitchen looks like: there are 18 cesium atomic clocks and 4 hydrogen masers. Plus a bunch of computers, of course.

Clocks are set in 4 rooms and each room is fully shielded from electromagnetic radiation and kept at a constant temperature. The accuracy of each hydrogen maser is 1 second in 67 million years and cesium clocks are accurate to 1 second in 100 million years. You would think that one clock will do, but no! To generate the time, they plug them all at once and then average the error, synthesize the result, advance the clock for 9 hours and voila - the JST strudel is ready! 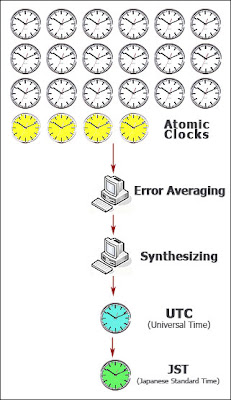 You have to love Japanese bakers - they are really funny. They say: Cesium clocks are better for long time stability (greater than one day) and hydrogen masers for short term stability (less than one day). Like half a second in 50 million years would matter. But for them, it obviously does. Respect!

As said before, all leading national laboratories get together once per day to compare their time with each other. The end result is a master-strudel called International Atomic Time (TAI).

Once the time is generated, it is then distributed to end users. And the queue of users is long: Everyone from your Internet service provider, military, nuclear plant operators, transportation, shipping, broadcasting, legal people - down to your bed side alarm clock - depend on and require National time. 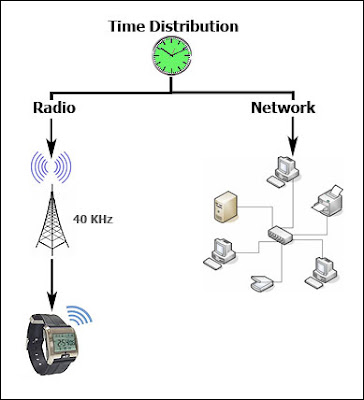 The users on the right are connected to the bakery via cable or network.
But let's focus on the magical distribution and synchronization of time which happens in the most mysterious way:
via radio waves!

The magic of radio

Ever since 1920s radio broadcasting was used as a vehicle to transport time signals.
You tune to your local radio station and just a few seconds before the news, you'll hear "bip, bip, bip, beeep: it is 5 o'clock." So you can set your watch or clock to correct time. In this scenario, time is obviously transmitted via radio, but YOU are the one who does the adjustment or synchronization of your clock.

Obviously, it would be much easier if the clock is somehow adjusted (synchronized) by itself, preferably more than once per day. And thanks to advancement in electronics, such synchronizing devices are now commonly installed in both clock and watches. Therefore as long as you are within the radius of a transmitter, your timepiece will be set and synchronized to the National time automatically.

What a brilliant solution!

The first problem with wireless synchronization is the fact that only a few countries transmit time signal. Japan, Germany, France, US, China, UK, Russia and Canada are 'on air' but each country has its own time distribution standard. Therefore your Japanese clock will not work in Germany and a Junghans watch cannot be synchronized in China.

The second problem is coverage: while one radio signal can synchronize an infinite number of clocks simultaneously in its area of coverage, the strength of radio signals decrease with distance. If you are located too far away from a transmitter, synchronization just won't happen.

This second challenge leads us to core of my quest for radio time signal detection and decoding.

One of the biggest challenges of astronomy is the whole art and science of learning to find things in the night sky. Like astronomy, radio signal detection is challenging because it requires specialist equipment, patience and plenty of "luck". t any given time there are millions of radio signals to be heard and detected. Some of them are very strong - like your local AM radio station or TV station. thers are detectable only under very special conditions, at certain times of the night or year. nd like distant starts, some of them are just too weak to be heard!

Since time signals, like JST, are just another form of radio signals, a couple years ago I got really excited about the possibility of 'catching' and decoding it. While a distance of 8,000 km is 8 times farther away from the coverage area of a Japanese transmitter, I felt that under right circumstances and with adequate equipment reception it could be possible.

As they say in astronomy: you just need a larger telescope. Or in my case: a larger antenna!

But why would I want to catch a time signal in the first place? Well, because I am watchmaker and seeing, hearing and decoding the most accurate time reference would be like looking at time's DNA structure under a microscope. Or watching the first nanoseconds of the Big Bang. It is difficult, bordering on impossible - and definitely a fun thing to try!

The initial research online showed that JST time is transmitted as radio signal at a frequency of 40 kHz. The transmitting site is located at Mount Ohtakadoya, 7,983 km north from Sydney. The output power of the transmitter is 50 KW and thanks to it's 250m tall antenna and kilometers of wire under the antenna, its radiated power is around 12KW. Transmitter's 'rego plate' : JJY.

Two problems become evident straight away: first, I needed a receiver which could be tuned down to 40KHz. This is a very low frequency. Your AM car radio goes down to 520KHz, and some marine communication receivers go down to 100KHz. Even at that frequency, the sensitivity is very poor - simply, most receivers are not designed for chasing low frequency signals.

There were a number of other problems with potential reception - but luckily I was not aware of them at the time.

In August 2010. I had stumbled upon the website of an Italian radio manufacturer who recently launched a revolutionary radio receiver featuring a new technology called Software Defined Radio (SDR) Basically their receiver was capable of tuning down to 10 KHz! In addition, the overall reception performance was hardly degraded even at such a low frequency. This new concept had other benefits when compared to your classical AM radio receiver. As you know, when you tune your car radio, you can listen to only one station at a time. SDR allows you to tune to all of them at once! In addition, you cannot only hear the signals, but you can see the signals as well because your personal computer is part of the radio. And much more - signal recording of the entire spectrum, number of narrow filters to filter the signal, various modulation modes... A true Space shuttle radio! 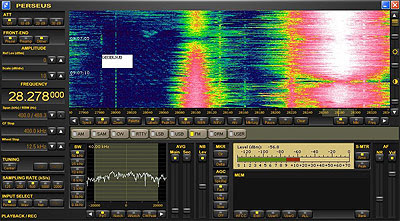 Two weeks later, to my wife's shock and horror, the Perseus was sitting in my radio shack...