To all who kindly offered feedback: much appreciated! The inbox was flooded with emails and only regret is that I cannot publish some of the most brilliant, eloquent, friendliest and humorous replies I've ever read. It was humbling to receive emails from restaurant owners, second hand car dealers, new car dealers, real estate agents, a psychologist, retail experts, coffee shop owners, tradesmen, a lawyer, stay at home mums, engineers - just to mention few.

To Simon W.: Simon, we've read your email five times and we choked from laughter and tears. It left such a powerful impression on all of us here. Mate you are BRILLIANT.

If you ever feel like you need to get something off your chest - I am listening. I may not have time to reply to each and every email but I do read them all. Keep 'em coming :-)

Further to your last article, I thought the "largest pendulum in the world" I saw when I stayed at the Hotel Cornavin, Geneve, might be of interest. The hotel website says: "A special feature is the world’s largest pendulum - it hangs from the ninth floor and swings right down to the ground floor in the lobby of the hotel. The total length is 30.02 metres."

Thank you for your email and info about the Geneva pendulum. In regards to your question: I definitely subscribe to those who believe that tick and tock are not just two different events, but two distinctive sounds as well!

Let's talk about the tick and tock events first.

The period of oscillation of a clock's pendulum consists of a full swing which includes one tick and one tock.

To simplify, let's say you hop on the plane and travel from Sydney to Perth. This would be the 'tick'. 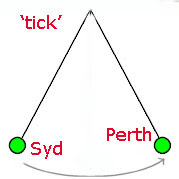 Coming back home would be 'tock'. 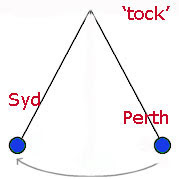 Now, while you've traveled the same distance on the same plane and have paid the same amount of money each way (and probably have watched the same movie) there is one main distinction between two trips: direction of the flight path.

Therefore tick and tock are not the same events. And you better hope that your pilot agrees with me! Otherwise, instead of flying you back home, you could end up in the middle of the Indian ocean, 3,500 km west of Perth. Same distance, same plane, same movie... wrong direction. Of course we can talk about the velocity and acceleration vectors of the clock pendulum, but we would still come to the same conclusion.

Now let's talk about the tick and tock sound.

What we describe and hear as one 'tick' is actually a complex sound which consists of
5 distinctive individual mini-ticks! We hear all those 5 clicks as one because they occur almost instantaneously.

Lets have a look at the watch escapement and how the sound is generated.

Here is a drawing of the watch lever escapement: 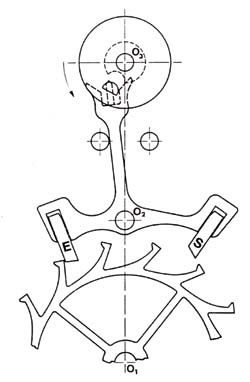 And this is what happens on the first leg of your flight, Sydney to Perth:
(or should I call it - an anatomy of 5 sounds of "tick") 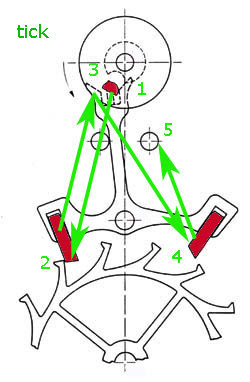 And here is the return flight, back home, or 'tock' : 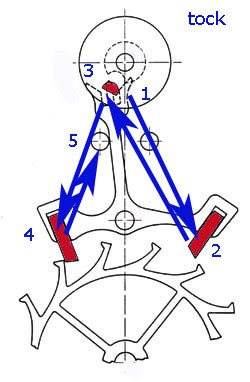 Now there is one MAJOR difference between the two.
While the paths are the same, the action of the ruby pins is switched.
The very same ruby which received the impulse in the "tick" phase
is locking in the "tock" phase. And vice versa.

This is possible thanks to the extremely fine geometry of the pallets jewels. To say that the exact position of the jewel in relation to the escape wheel is critical would be a gross understatement. In traditional watchmaking, pallet jewels are set and secured onto a fork with shellac. Shellac is natural resin (produced by an Indian lac bug) and may be dissolved by alcohol. The watchmaker would set the jewel, assemble the escapement, check for the depth of engagement and then make further adjustments. Unlike glue, shellac can be melted an infinite number of times. Nevertheless, the adjustment process is tedious and time consuming.

Let me just give you another analogy.

Let's say that on your trip to Perth you make a stop over in Adelaide. While there, you visit a local watch dealer and buy a watch. Then have a strudel and coffee and fly on to Perth. This is the tick action.

The tock: on your way home, you make another stop over in Adelaide, sell that Omega back to dealer and have another strudel and coffee, then hop on the plane to Sydney.

Can you note the difference between the two events? First, you've bought the watch, then you've sold it. That means that both YOU and the DEALER were both buyer and seller.

This is exactly what happens in the relation between pallet stones and escape wheels. During the tick, one stone is receiving impulse while the other is locking. And during the tock, it goes the other way around. Same wheel, same pallets, same stones - just different actions.

If we had a very sensitive recording device which would then play the sound in 'slow motion' (spectral analysis) we will see those different actions sound differently. It would roughly look something like the drawing below. Events 1 and 4 are the loudest, but once again, since all 5 happen almost instantaneously, we hear them all as one tick. 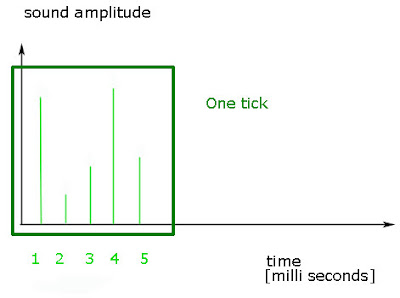 Based on the above I am quite happy to conclude that when we are talking about ticks and tocks, both events and both sounds are different, and yes, rightly so, we say that there is only one tick and one tock.

Of course there are other types of escapements which produce only one sound - but more about that on another occasion.

Finally, here is a real-time snapshot of a timing machine recording showing the performance of a freshly overhauled watch. Note 0 sec/day error and 0.1millisecond beat error with a fantastic amplitude of 333 degrees: 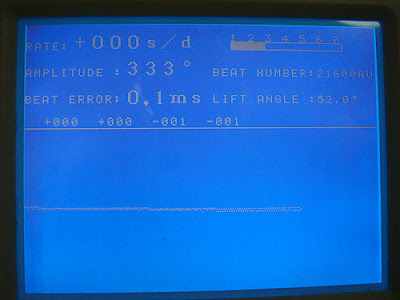 The white squares on the bottom half of the screen are actually individual ticks and tocks. And as you can see, under magnification, they are nicely spaced in time:

This particular watch movement "produces" 21,600 white square packets each hour.
Neatly packed inside each packet are the 5 sounds of escapement - a total of almost 2.6 million sounds generated each day. What a mighty heart that is!

And this is precisely why we adore mechanical watches.

Oh, I almost forgot: with regards to that 30.02m hotel pendulum in Geneva: Using the simplified formula for the period of a pendulum mentioned in the last newsletter we can easily work out the length of ticks and tocks, in seconds:

If you substitute constants and input L=30.02m then T (tick+tock) is approx. 11 seconds. (Or that would be 27 seconds per swing period on the Moon!)


Talking about the Moon...

While we are there.... here is an email received from a fellow subscriber. I think it's cool (and so humanely personal) so I have to share it with you:

"I wanted to ask you to keep an eye out for me for an anniversary Moonwatch or one from the landing year. Unfortunately I missed a beauty you had in just recently. The reason for me is very significant. On July 21st 1969 I flew with my family from England to start a new life in Australia. As a bright eyed seven year old, it was a new adventure, only surpassed by the adventure that was unfolding above me beyond 30,000 feet.

During one of the night sections of the flight to Australia the Captain came onto the intercom and announced "Ladies and gentlemen, this is your Captain speaking. Man has just set foot on the moon!". My father turned to me, pointing out to the moon through our window and said to me "If you look closely you can see him waiving". I later discovered I shared the same first name with Neil Armstrong and my father took me to see him, Buzz Aldrin and Michael Collins when they visited Perth later that year.

So for all those reasons above and a boyhood fascination with space travel the Moonwatch is the piece I have always wanted to own and wear. -N."
Posted by Nick at 3:23 PM