Hello Nick
could you tell me please more about this Rolex table clock:
a value, how old it is and if there were many made? 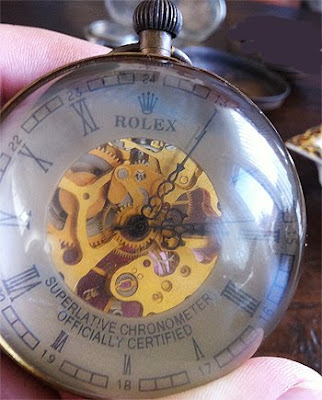 Unfortunately, Rolex never made a table clock of the above design. The clock on the picture is a recent Indian or Chinese fake, it has no monetary or collector's value other than 'novelty' value ($5-10).

However the glass ball design is not a a novelty in itself; during the mid to late 1800s a number of French and British makers have produced similar pieces. Some of them were true works of art and highly collectable, but none of them were in the skeleton style or had a signed dial. In the tradition of clockmaking in that era, the maker's name was engraved on the movement.

Original French ball clocks are very collectable and desirable. Such demand created a market for fakes. The most popular variety is the signed "Omega" but other watch brands - like the above Rolex- are not uncommon. What they do have in common is the appearance: "aged" brass patinated frame, modified wrist or pocket watch movement of later production and dubious "mysterious" provenance; the package is designed to fool novice watch enthusiasts!
Posted by Nick at 3:42 PM